What Is The Most Dangerous Animal We Have?

We have a number of deadly species at Exotic Explorers, but which is the most dangerous we have?

Our Most Dangerous Animal

The Giant African Snail. I’m serious. I know you were expecting me to say the Boa Constrictor, or the Snowy Owl, but the Giant African Snail is the most destructive animal we have. They multiply faster than Gremlins in water, devour whole farm crops, destroy your house, and can even kill humans.
These ravenous snails can measure up to 20cm (7.9inch) long and weigh up to 32g, and they eat over 500 types of plants.

What Real Harm Can A Snail Do?

Not a great deal, but consider the fact that one will lay up to 1,200 eggs a year, and each can live up to 8 years, and you’ve got trouble.
They are considered one of the top 100 invasive species in the world according to the Global Invasive Species Database, and while originating in Africa, they have now spread to some Pacific Islands, the Caribbean, Asia and the USA.

Happy Birthday Nan! I Brought You Some Snails!

In the 1960s, the Giant African Snails were first found in Florida, thanks to a boy who smuggled 3 snails into the country after a trip to Hawaii in order to surprise his grandmother for her birthday. She wasn’t keen on keeping the creatures so let them go in her garden. 7 years later and there were more than 18,000 snails and thousands of eggs. The process of eradication cost the government $1 million over the course of 10 years.
Despite this, the Giant African Snails have found their way back to the US and it seems the government have accepted that eradication is next to impossible, however efforts to control them are common, including ‘Wanted’ posters on walls in some towns! 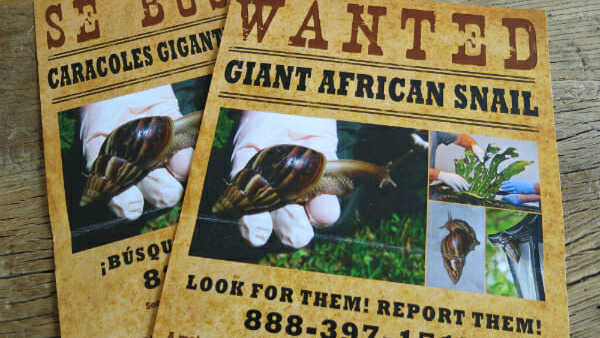 They’ll Destroy Your Farm And Eat Your House

Most snails feed on decaying organic material, however the Giant African Snail actually feeds on the plants themselves, and will eat the whole plant even down to its roots. This can be devastating if an invasion threatens local farms, with many historic cases of these snails making havoc of farmers livelihoods.
Professor Robert Cowie, a researcher at the Pacific Biosciences Research Centre in Hawaii explained how these creatures are thriving in parts of the US due to having no known predators. “If they get in your yard and the climate is suitable, they can destroy every plant in sight”. In addition to this, young snails eager to strengthen their growing shells seek out calcium by eating house stucco and cement, causing expensive damage to homes.

Giant African Snails are solitary animals, meaning they only congregate to mate. Now consider the movement speed of the snail. Can you imagine moving that speed to find a mate, only to find that finally when you find another snail, they are the same gender as you?
Not a problem for the Giant African Snails as they are hermaphrodites, meaning they possess both reproductive organs, so any snail can produce eggs. Mating occurs all year round and snails can breed once every 2-3 months, with roughly 300 eggs taking less than 2 weeks to hatch. An incredible 90% of these hatchlings will make it to adulthood.

These Snails Can Kill

Giant African Snails in the wild can carry a nematode – a kind of parasite known as the rat lungworm. These tiny worms when ingested, travel all the way to the brain and can lead to eosinophilic meningitis, with symptoms ranging from headaches to coma and death.
Oh that’s not so scary. Who would ever ingest a snail?
Well.. In some parts of the world, snails are eaten uncooked or partially cooked. While this probably sounds pretty disgusting for us, these snails are considered a delicacy for some!
There is also a lot of misinformation about the benefits of snail slime, with people believing it has infinite healing powers, leading to snail slime being used in many alternative medicines. Done professionally, this poses no medical risk, but people that decide to create their own to use or sell locally can cause a great deal of problems.

Do You Want To Meet Our Lovely Safe & Friendly Giant African Snails?

At Exotic Explorers we have some Giant African Snails, all kept safely and responsibly! You can meet these in person for a unique experience. Why not combine this with some of our reptiles, birds of prey or small mammals?
Take a look around our website for our animal list and pricing.

“The snail is incredibly powerful, so powerful that it carries its house on its shoulders wherever it goes.” - Vincent Okay Nwachukwu